The headquarters of a pargana of the same name, this village lies in Lat. 29 10 N and Long 78 0 E. and stands on the high bank of the Burhi Ganga. It is 23 miles north-east of the district headquarters and 7 miles east of the tahsil headquarters, being connected with both by a metalled road. 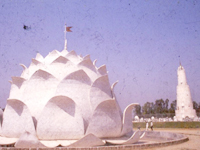 According to Jain tradition, Hastinapur was one of the earliest Indian cities like Ayodhya and Kashi and came into existence during the time of Rishabhadeva (the first tirthankara) whose grandson, Somaprabha, was the first ruler of the place. It is also said to be the birth place of three Jain tirthankars, Shantinatha, Kunthnnath and Arahanatha. The Buddhists say that this city was the capital of Kururattam. The Mahabharata also gives the early history of the place, the founder of which is generally believed to be King Hastin, fifth in descent from Bharta. It was the capital of the Kauravas and Pandavas. It is said to have extended as far as Barnawa in the weat and Puth in the south. At the time of the Mahabharata War it was in the heyday of its prosperity which, however, began to decline thereafter. The severe floods in the Ganga, which washed away the city, and the transfer of the capital of Kaushambi left in complete obscurity but it was rehabilitated twice within the next few centuries though it never achieved its former glory.

The remains of the ancient city are scattered over a large area lying around the village which is divided into two portions, Patti Kauravan and Patti Pandavan. Some of the most important buildings and sites of the place are described briefly below. The Digambar Jain temple was built about 160 year ago probably on the site of an old Jain Temple. Devpal Soni of Ajmer had installed in Hastinapur in 1174 a life-size image of Shantinatha, the sixteenth tirthankara, and this image, which was dug out a few years ago from a mound near by has been placed in this temple. Vidura-ka-tila (also known as Ulta-khera ) called after Vidura (the halfbrother of Dhritarashtra and Pandu) is a collection of several mounds,some being 50 to 60 feet high and extending a few furlongs. Draupadi Ghat, on the banks of the Burhganga, is a bathings ghat where people flock in large numbers on bathings festivals. Draupadi-ki-Rasoi is belived to be the site of Draupadi’s kitchen and is situated on the banks of the Burhganga.

Archaeological excavations of Vidura-ka-tila (undertaken in 1950-52) as also of other neighboring sites have brought to light various antiquities which associate this place with a succession of cultural periods.The main temple of Jambudeep is also situated there.

Sadar bazar there is a baba Augharnath temple is also called a Kali Paltan Mandir. On 10th May,1857 the Indian citizen take an oath to get freedom at this temple.

It is 30 meter high made of marbel, there function are organised on every national festivals and people pay homage to various shahids. Shahid Smarak is located at bhainsali, earlier was Sati Sarover. It was said that Mandodari before her marriage bath there regularly before going the worship of Shiv-Parvati at Bilveshwar Nath temple.

This temple is very near to the Suraj Kund. The Nauchandi Mela is organised every year after one week of Holi festival either in March end of april first week. This is very famous mela. Few lakh peple viist this Mela every year.

There is a pond at Meerut called Suraj Kund, built by a rich businessman Lawar Jahawar Lal in 1714. This was filled up by water of Abu Nala earlier. Later it was filled by Ganga Canal. There are sevral temples around the Suraj Kund. One of them is famous Baba Manohar Nath temple. It was said that it was built during the period of Shahjahan.